This year Easton turns 8, which is a big birthday at our house. So he got to choose whatever birthday theme that he wanted for his party this year. I don't know why but he chose "Indiana Jones."
So...we started with the invitations. I made them pretty simple by making a tri-fold invite out of card stock. Inside the invite we had a map, like the map in the Indiana Jones movies, with a dotted line that lead to our home. The left side of the invite had the party theme & the right side had all the party details. On the front of the invite I put a small label in the center to close it that read "OPEN-Adventure Ahead."
I then wrapped the invite a few times around in some twine and tied on a tag with the child's name. Best part about these invites is they were made with stuff that I already had...which made them FREE!! 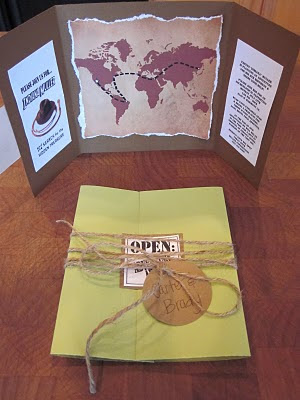 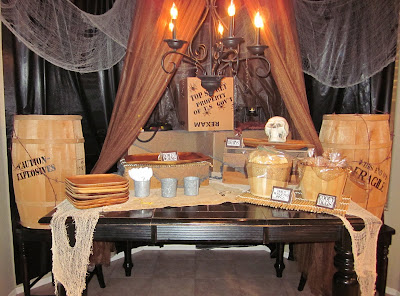 I decorated our kitchen nook all "Indiana Jones-ish" with crates, boxes & barrels that were all labeled in vinyl letters. Some read "Fragile-this end up" others read "Caution-Explosives." I put up black vinyl table clothes in the background (over my windows) to make it cave-like. I added creepy clothes to the backdrop & table clothes. Then I served the food off of old wooden plates & barrels. I topped the decor off with a choc. brown canopy that I hung over the entire table.
The boys LOVED IT!! I knew I had done a good job when my oldest son told me that this party looked just like the movies. 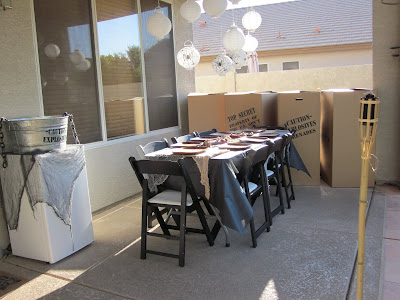 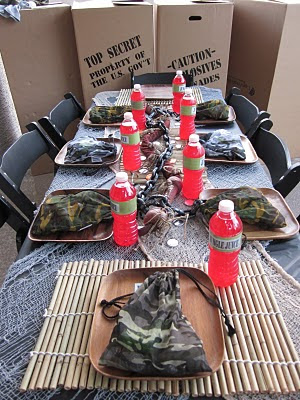 I had the boys eat outside since we were doing all our games outside & then swimming. I put up a table and covered it with black tablecloths & creepy clothes. I surrounded the patio with big boxes that also had misc. labels on them. Then I placed small tiki torches around the patio in Terra-cotta pots (I didn't light them for safety, but just having them around was a cool effect). Lastly, I hung white and spider paper lanterns over the table and then they glowed while they ate dinner (once the sun went down). I had ALL of these decorations in my Halloween bins so I didn't have to buy one single thing to decorate. The only thing I didn't have were the boxes, which I just borrowed from some friends.

Next....GAMES
As soon as the guests arrived, we sent them out to our sandbox for an "Archaeological Dig." We gave each boy a camouflage nap sack (oriental trading-12 for $10) that they got to fill with whatever buried treasure they dug up in the sand. The boys found gold (bubblegum coins from Oriental Trading 100 for $5), bones (old Halloween decorations that I had), magnifying glasses (Dollar Tree 6 for $1), snakes (Oriental Trading Co. 56 for $6.00) & squirt guns (Party City Clearance 8 for .50). Not only did they have fun outside digging but the nap sack doubled as their goody bag that they got to take home.

The second game that we played was a blow dart war. I got straws (the larger ones from Sonic) & Q-tips that I had soaked in water. The boys got to blow the darts that they had at each other. They LOVED IT!! So simple but they had a blast trying to get    each other with their blow darts. (I had all these supplies at home...which made this game TOTALLY FREE)

After we finished that game...we gave each of the boys a "Poison Anecdote" that they had to take quickly to rid themselves of the poison that they had gotten by getting hit with the blow darts. The anecdote were just different colored green M&M's a shower I  in a medicine bottle from Walgreen's. 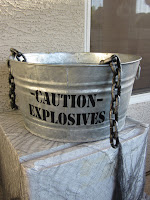 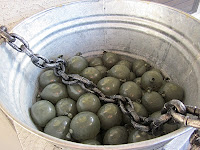 (Again, had the M&M's from a shower I did and Walgreen's gave me the medicine bottles for FREE...so this little favor was no cost). The boys thought that the bottles of "Poison Anecdote" were pretty cool and the M&M's made a good snack between games.

Our last game  was a grenade fight...which were really small grenade water balloons that I found at Walmart for $1.50. I put all the grenades in a metal bucket labeled "Explosives." The boys had a great time cooling off in the heat with the water balloon fight.
Then the boys took a quick swim while I prepped the food...
GROSS-GRUB...(or food)
I think my favorite part was coming up with food that we could mimic as gross-out grub. I wanted it to be food that they would recognize, so they would actually eat it but be able to give each item a gross name. 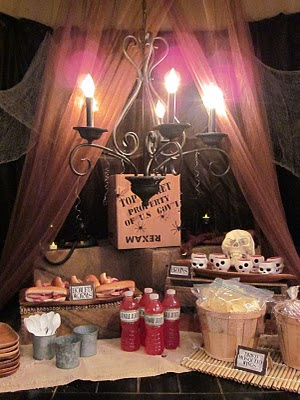 The boys ate boiled worms (hot dogs cut length wise & then boiled so they would curl), dried mosquito wings (potato chips) gooey bugs (gummy bugs), brains served out of skulls (strawberry jello with real strawberry's in it for texture & made with sour cream to give it a pinkish color) & jungle juice for drinks
(fruit punch that I poured into water bottles). 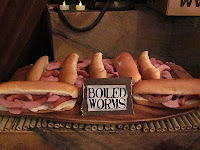 The boys finished the evening by watching the first Indiana Jones movie. This really was my favorite party for my boys that I have ever done. It was inexpensive to do because I had a lot of the supplies that I needed for it already. Plus it was the perfect party to have for boys...They all had a FAB-U-LOUS time!!!
Posted by Alyssa Muller at 9:42 PM

Alyssa Muller
Peoria, AZ, United States
I am one busy mom to 4 busy boys. In my spare time I love to decorate, plan parties, entertain, & craft. Most of the time I can't think straight but I'm loving every minute of it.